Copyright: © 2016 Yoneda M, et al. This is an open-access article distributed under the terms of the Creative Commons Attribution License, which permits unrestricted use, distribution, and reproduction in any medium, provided the original author and source are credited.

In recent years, the percentage of obese individuals has been rising in many countries, accompanied by a sharp increase in the prevalence of obesity-associated metabolic disease, such as metabolic syndrome and diabetes mellitus. We recently compared the medical survey data of each generation between two Japanese populations with different lifestyles, i.e., the group of native Japanese living in Hiroshima, Japan, and the group of Japanese-Americans (Japanese people who migrated to Hawaii or Los Angeles, USA, and their offspring), focusing on differences in nutrient intake and the prevalence of obesity, metabolic syndrome, and diabetes mellitus. Japanese-Americans tended to consume a high-fat and high-simple carbohydrate diet, and had a higher prevalence of obesity-associated metabolic disease than native Japanese living in Japan. However, the detailed comparison among Japanese-Americans revealed that experience with the Japanese lifestyle during childhood suppressed the onset of obesity in later years.

Overseas immigration of the Japanese people began in the latter half of the 19th century. In those days, lifestyle related to diet and exercise differed largely between Japan and the USA. The lifestyle of first-generation Japanese-Americans (JA-1) who were born in Japan and immigrated to the USA underwent rapid westernization (change from the Japanese to the American style) after immigration, and their offspring born and raised in the USA (second- or later-generation: JA-2) were exposed to the American lifestyle since birth.

Since 1970, we have been conducting an epidemiological study titled “the Hawaii-Los Angeles-Hiroshima study,” which involves two populations of Japanese people without any differences in genetic predisposition but who lives under different environmental factors: the group of Japanese- Americans having acquired an American lifestyle and the group of native Japanese living in Hiroshima following the Japanese lifestyle. By comparing the medical survey data between these two groups, we previously reported the influence of lifestyle westernization on the features of illness among Japanese people.

Using the data so far collected in the Hawaii-Los Angeles- Hiroshima study, this paper will describe the influence of the Japanese or American lifestyle on obesity-associated metabolic disorders in Japanese people through comparison of the group of native Japanese living in Japan and the group of Japanese- Americans, and via analysis of each generation (JA-1 and JA-2) of Japanese-Americans.

We started our medical research on Japanese-Americans in Hilo and Kona, on Island of Hawaii, in 1970, and in Los Angeles, California, in 1978. Medical examinations have been conducted every few years in each district. By 2015, we performed these medical examinations a total of 24 times, and the total number of study participants has exceeded 13,000 (Figure 1). Figure 1: The Hawaii-Los Angeles-Hiroshima study. Medical studies on Japanese-Americans began in Hawaii in 1970 and in Los Angeles in 1978. The cumulative number of these studies reached 24 by 2015, and the total number of persons who underwent medical examinations stands at 13,289.

All subjects provided written informed consent to participate in the examinations. This study was approved by the ethics committee of Hiroshima University and the Hiroshima Kenjin-kai Associations of Island of Hawaii and Southern California.

In the morning, following an overnight fast, each subject underwent an interview, physical examination, blood pressure measurements, and venous blood sampling. An oral glucose tolerance test was performed on the subjects without diabetes mellitus. Each blood sample was centrifuged, and the obtained serum samples were immediately frozen and stored until analysis.

From the survey data conducted from 1992 to 1995, we divided the Japanese-Americans into two subgroups (JA-1 and JA-2) for comparison of nutritional data (Figure 2) [2]. 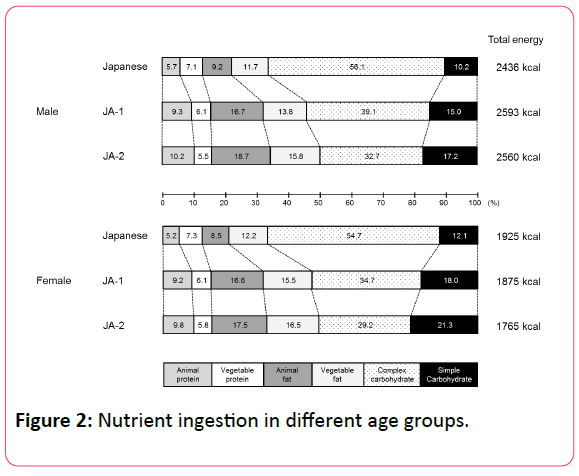 In our survey from 2007 to 2010, Kibei was defined as the history of staying in Japan for ≥ 5 years before the age of 18. The prevalence of obesity and diabetes among Japanese-Americans aged 30 and older was analyzed in relation to age and experience with Kibei (Figure 3) [7]. 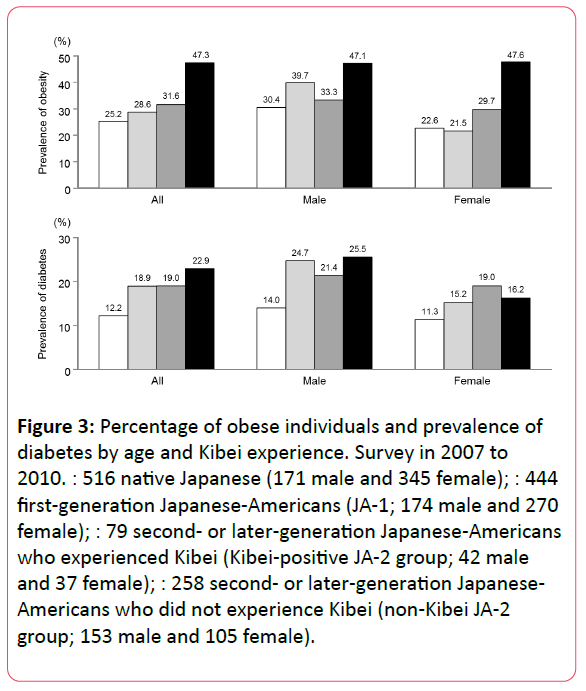 On the other hand, the prevalence of diabetes was higher in all Japanese-American groups than in the Japanese group, but there was no significant difference in this parameter between the JA-1, Kibei-positive JA-2, and non-Kibei JA-2 groups.

In brief, these results indicate that Japanese people continuously exposed to the American lifestyle for a long period after birth were more likely to become obese.

Onset of obesity was suppressed in Japanese people who lived in Japan during childhood (e.g., JA-1 and Kibei-positive JA-2), although onset of diabetes was not suppressed in these groups (Figure 4). 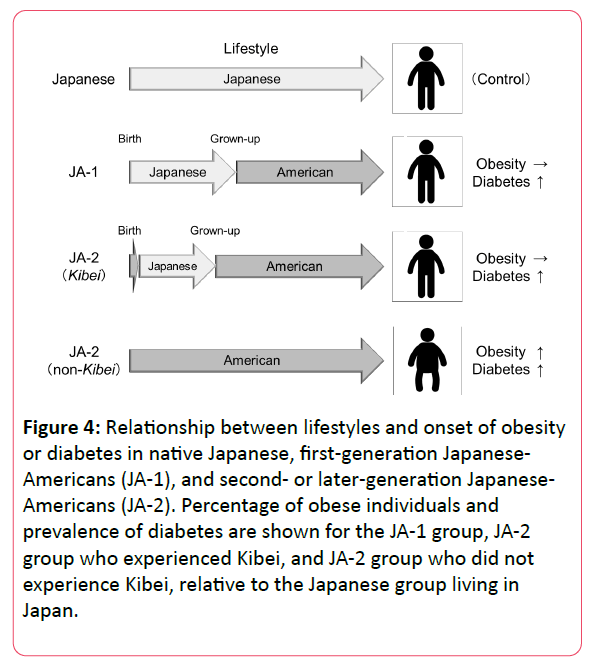 Figure 4: Relationship between lifestyles and onset of obesity or diabetes in native Japanese, first-generation Japanese- Americans (JA-1), and second- or later-generation Japanese- Americans (JA-2). Percentage of obese individuals and prevalence of diabetes are shown for the JA-1 group, JA-2 group who experienced Kibei, and JA-2 group who did not experience Kibei, relative to the Japanese group living in Japan.

Japanese-Americans are known to be genetically predisposed to low insulin secretion. The results suggest that abnormal glucose tolerance is likely to develop before the onset of obesity if Japanese people follow the American lifestyle even for a relatively short period of time.

On the basis of this comparison of survey data between native Japanese and Japanese-Americans (two groups identical in genetic predisposition but differing in lifestyle from each other), we believe definitely that obesity-associated metabolic disorders can arise from westernization of the lifestyle of Japanese people. The results of the Hawaii-Los Angeles-Hiroshima study indicate the importance of acquiring a Japanese dietary style beginning in childhood so that onset of obesity-associated metabolic disease may be prevented.

This survey was supported by the members of the Hiroshima Kenjin-kai Associations of Island of Hawaii and Southern California.